Click Here to find the right oxygen sensors for your vehicle

Located in the exhaust system, the oxygen sensor produces a voltage proportional to the amount of oxygen in the exhaust versus the air (<150 mV lean & >750 mV rich). This data is used to control the air-fuel mixture through PORT or TFI injectors and carburetors. Sensors are monitored or checked anywhere from 4 to 100 times per second. The air-fuel mixture is thus always moving from rich to lean averaging very close to stoichiometric (ideal) ratios.

The ceramic sensor body is contained in a housing which protects it against mechanical effects and facilitates mounting. The ceramic body is made of stabilized zirconium dioxide (zirconia). Its surfaces are coated with electrodes made of a gas-permeable platinum layer. In addition, a porous ceramic coating has been applied to the side exposed to the exhaust gas. This coating prevents contamination and erosion of the electrode surfaces by combustion residue and particulates in the exhaust gases.

Walker Oxygen Sensors are precision made for outstanding performance and manufactured to meet and exceed all original equipment specification and test requirements. 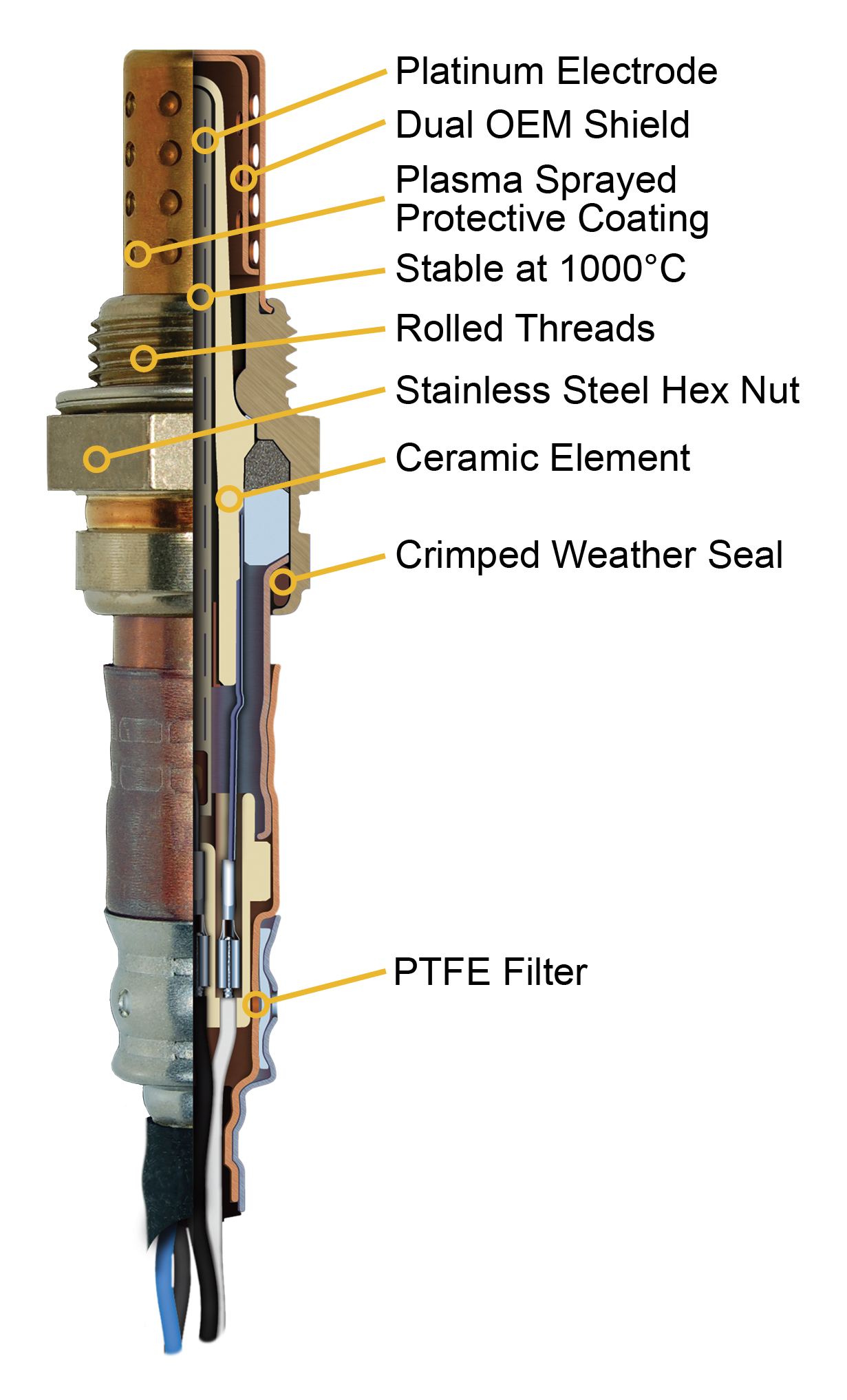 Malfunctioning and Failed Sensors
Oxygen sensors can fail when the sensor’s ceramic element is exposed to certain types of silicone compounds or when an oil-burning engine adds to the sensor becoming oil-fouled. Small amounts of tetra-ethyl lead in the gasoline or over-the-counter fuel additives, which are not “oxygen sensor safe,” can also kill an oxygen sensor.

Failures can occur instantaneously at the time the contaminant contacts the oxygen sensor, causing a dead sensor, or gradually over a period of time. Gradual deterioration results in a slow sensor which does not react as quickly as it should, causing the catalytic converter to perform less efficiently. This can lead to premature failure of the catalytic converter.

A dead sensor can be detected with a relatively inexpensive digital volt-ohm meter. A slow sensor can only be diagnosed by using a digital oscilloscope or scope meter. Most installers will probably not be able to spot an oxygen sensor problem until it is too late and the catalytic converter is already well on its way to failure.

Preventive Maintenance
One-wire and two-wire unheated oxygen sensors should be checked or replaced every 30,000 to 50,000 miles. These sensors rely solely on hot exhaust gas to heat up to operating temperature and are designed to allow a large volume of exhaust gas to make contact with the active ceramic element. These sensors are exposed to contamination, especially the “wide-slot” varieties found on Chrysler, Ford, and General Motors vehicles.

Heated oxygen sensors have a built-in heater which heats the sensors. Much less exhaust gas needs to contact the ceramic element, making these sensors less prone to contamination.

Heated sensors can also be located further downstream (closer to the catalytic converter) which increases their life expectancy. Heated oxygen sensors should be checked or replaced every 60,000 to 100,000 miles.

Where are my oxygen sensors located?

Diagnostic Trouble Codes (DTC)
When oxygen sensor failure occurs, a DTC is recorded in the Engine Control Unit (ECU) and a Malfunction Indicator Lamp (MIL) is illuminated on the dash, alerting the driver the vehicle has a problem.

To diagnose the fault, a code reader or scan tool is connected to the vehicle to read the trouble code. The scan tools can vary in the display of information shown. Some show a definition for the code, while others show only a trouble code number. There are generic or standard OBD II codes and vehicle manufacturers who use additional codes called enhanced or OEM-specific codes. On many older (pre 1995) vehicles, a trouble code or DTC can be read without a scan tool or code reader by using a manual flash code procedure.

After having identified the description using a list of DTC trouble codes, the next step is to diagnose the fault. You must follow the diagnostic procedure to properly diagnose the system, sensor, and/or circuit.

The trouble code itself does not tell you which part to replace! The scan tools or code readers speak OBD II language, meaning the references to the engine are coded.

When applying OBD II to oxygen sensors, the codes would then read B1S1. This refers to Bank 1 Sensor 1.

Finding Bank 1 is not difficult, but depends on the engine cylinder locations. For V6, V8, V10, V12, and W16 engines, whichever side cylinder #1 is on, is referred to as Bank 1. Bank 2 is the opposite side. For inline engines, there is only Bank 1, never a Bank 2.

Life Expectancy of an Oxygen Sensor
30,000 to 50,000 miles is typical. However, when constantly exposed to the harsh environment found in an automobile’s exhaust system, the oxygen sensor sustains a constant barrage of harmful exhaust gases, extreme heat, and high velocity particulates. And that is under normal operating conditions!

Sometimes contaminants such as coolant, oil, or silicone particulates will find their way to the sensor as well. These contaminate the sensor and render it inoperable. An oxygen sensor’s life is long, in some applications up to 100,000 miles. Whether by contamination or normal use, its effectiveness will inevitably decrease over time.

At Walker Products, we recognize the need to keep vehicles running clean. A bad oxygen sensor can cause unacceptable emissions levels, affect performance, and ultimately damage the catalytic converter. Make it a point to check the oxygen sensors at each tune-up and replace faulty sensors with new Walker oxygen sensors.

In addition, we have a large assortment of O2 Sensor Sockets and Wrenches, giving the technician or DIY’er the right tools needed to complete any O2 Sensor project with ease and accessibility.

6.0 COMMON OBDII CODES
When an O2 sensor failure occurs, a DTC or diagnostic trouble code is recorded in the ECU and a check engine light appears on the vehicle’s dash. The DTC must be retrieved using a scanning tool. There are generic or standard OBDII codes along with enhanced or OEM specific codes. Below is a list of the more common OBDII codes, along with the possible cause or causes of the code.